You are here: Home / Archives for Woodstock 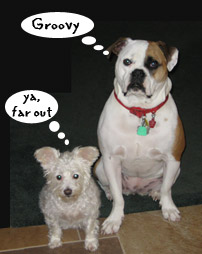 I had a little Woodstock party today. Just me and Lucy and Rosie. They’re the only other people I know that like the music. Jennie does, but she’s not here.

I was thinking about that on my way home from Starbucks… I don’t really have any close friends that are into what I’m into, ya know? That think like I do… or like Woodstock. How can you not like Woodstock? or peace n’ luv n’ stuff?

Hubby? Nah, he was a “greaser” back in the day. He chased little hippies like me.

But seriously, wouldn’t that have been a perfect theme for a party? For the Woodstock Anniversary? Excellent playlist of tunes… could have all sorts of yummy munchies… and stuff. Nah, not that kind o’ stuff. I was actually never into pot. Made me feel introverted and I was far from introverted and didn’t like feeling that way. But I do love the smell!

So ya, we had our little party. The girls fell asleep when I played Joni Mitchell… I think they were worn out from all of the excitement.

Lest I forget, baby Rosie is 2 yrs old. Updated her baby book… as is usual and customary, the pics are getting fewer and farther between. Isn’t that the way it goes?

Which reminds me. When I was watching the Woodstock movie over the weekend, I was thinking, “man, I wish I had pictures of me & my friends from those days.” But you know, we didn’t exactly carry around cameras like kids do now (well, if they do… and I think they do, if not in their phones). And it’s not like we were around with the fam for the group pics either. Probably the only photos of me around that time are the ones from the detention center… did they take them like they do when you’re arrested? hmm, don’t remember. Well, I’m exaggerating. I just said that for effect. I was only taken in once… or so. Really.

*oh, btw, can you tell by looking at Rosie’s pics that she’s daddy’s girl?

Ever watch VH1’s The Drug Years? While making coffee this morning, I was singing “One Toke Over the Line” by Brewer & Shipley (you know, when you wake up singing a song out of the blue? altho this wasn’t entirely out of the blue) (and no, I wasn’t smokin’ anything). Hubby was sitting there, reading the paper, and looked at me with his usual, “Where the hell did that come from?” and I told him that I had watched VH1 last nite…
“You know, that series The Drug Years?”
He just started laughing…
“What? It’s really good! Like the history channel…”
He couldn’t stop laughing, then held up his hand in a PEACE sign, and just said, “Ya man, like, the history channel for hippies…” hahahahahaha….

I remembered that I had downloaded the song – back in the Napster days – but I’ll be darned if I can find it. I thought that I saved my entire music list when I switched computers, but I don’t know where it is! Dagnabbit.

ANyway. I wonder if they’ll have another Woodstock marathon this August again… yikes. I don’t want it to be August yet! The snow from our latest snow storm (in April!) just melted!

Ok, enough of the flashbacks already. I would like to get some work done – disrupted my planned schedule. Yup, even on a Saturday… what can I say.
c’yall later.