You are here: Home / Archives for Jennie

It all started with a 1954 photo-op …
I’m very grateful to have these in the history book of my fam.

Yesterday I was excited to received one of my latest purchases from eBay, the 26th ANNUAL OF ADVERTISING ART, 1947. I had barely made a tear in the packaging when I smelled that scent… that old, in-the-basement smell of stored books. You know what I mean, right? As I tore the wrapping off I inhaled deeper, “ahhhhh, just what I was waiting for” and of course I got all excited!  Hubby always asks me “What did you get that for?” Well geeez dude, I love to look at it. What does anyone buy books for? Silly. Great ads abound inside that book, not to mention a piece of history when they used dexadrine and cocaine (in Coca-Cola) for additives in every day items, such as in this Paul Rand ad.

Speaking of art, I’m looking forward to visiting the Tory Folliard Gallery for a new exhibit called When Animals Talk

I just wish my art touring buddy was going to be with me. Actually we’ll be taking a road trip down to vist Jennie & Brian soon. Can’t wait!

I cleared my palette of work the week of Jennie’s wedding, as well as the following week when she moved. I have 2 more days left to play.

I really shouldn’t wait for “vacation” to tend to my own web stuff, ya know? But I don’t take the time to do those necessary things… I know I’ve said this before.

Balance. I need balance. Seems like everything has to be to the extreme so often. You’d think I’d know by now.

ANYway, for those of you not on Facebook , here’s a photo of my beautiful baby girl and her new hubby. 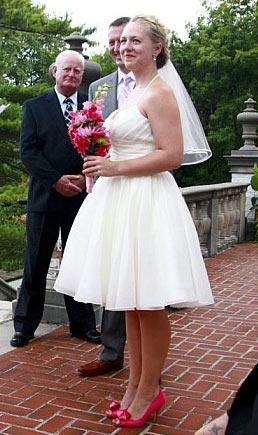 It was a magical day!
xoxo

Mumsy was wondering when she was going to be able to come over and see the new kitchen, now that I’ve done the fun stuff and fixed it up. Well, it pretty much looks the same way it looked when she last saw it… haven’t done a damn thing.

Kind of weird if you ask me. That is the fun stuff, yet I haven’t really gotten into it. I don’t want to put up any of the old decor stuff – blah, old. Plus, I threw most of it out anyway. To tell you the truth, my mind and ideas are as blank as the kitchen is. Same with the bathroom… and the dining room.

If you would have told me a year ago that I wouldn’t have the whole damn thing redecorated by now, I would have declared you insane. I dunno. Not sure what I’m waiting for…

Besides that… I’m bored. Not tired. Certainly don’t feel like working – I saved lives today and it’s the weekend. Sure hope the Badgers and the Packers play better than last weekend.

Did I tell you that Jennie ran the Lakefront Marathon last Sunday? Yes, the same day as the Chicago Marathon – hot – but it went a lot smoother than Chicago did… dang. She did well though. Yay Jennie!

Alrighty, think I’ll eat a bagel and maybe catch up on some DVRd stuff. Have a groovy weekend everyone.